On 02.11.2006 the vice governor of the Province of Salzburg, LHStv. Dr. Wilfried Haslauer invited to a press conference to announce the three years prolongation of Salzburg NewMediaLab, the competence centre on digital content engineering I happen to lead. „On stage“ there were, besides Wilfried Haslauer, Siegfried Reich (CEO of Salzburg Research), Lothar Beckel (CEO of Geospace GmbH) and myself.

We presented a summary of the last three years during which ten projects with an overall turnover of more that 2 million Euro were conducted and also announced the thematic focus of the prolongation phase (2006-2009): a combination of multimedia content management, semantic technologies and social software to raise the potential of digital content. 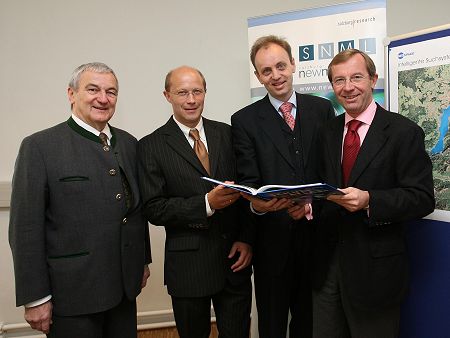 See one of the (German) press clippings for further information:
Pressemedung APA ZunkunftWissen